So, you’ve come to have a domestic rabbit (aka a “house” rabbit) and you don’t know where to start with caring for them. That’s okay! We’re here to help!

Rabbit Care 101 is a quick, basic guide to rabbit care. It covers a rabbit’s diet, housing requirements, and behavior. For more detailed information on these topics, links are provided underneath each section of this page.

If you’ve found a stray house rabbit, our Lost and Found page covers what to do to find their owner. If you’ve found a rabbit and it’s in your care, we recommend you still review Rabbit Care 101.

A rabbit’s diet is 80% timothy hay—not carrots, salad, fruit, or any of that stuff you see on television. 10% rabbit pellets, and 10% fresh foods.

Rabbits need to eat hay. It’s the most important part of their diet. Timothy hay is the best type of hay to feed rabbits. If you’re allergic to timothy hay, you can use Orchard Grass hay. There are a few other types of hay that rabbits can eat, but Timothy and Orchard Grass are the best nutrition-wise.

If you have a baby bunny that is weaning from mom, check out House Rabbit Society’s baby rabbit section because their dietary requirements are different.

Along with timothy hay, your rabbit needs a small amount of rabbit pellets daily. A very small amount. This helps give them added vitamins and minerals the hay may be missing.

Leafy greens should also make an appearance in their diet—about 10% of their daily diet. If you have just brought bunny home, do not give them any vegetables for the two weeks. The first two weeks in a new home are an acclimation period, and adding vegetables during this stressful time can give them stomach issues.

The last part of rabbit diets is water. Rabbits drink a lot and must have access to fresh, clean water 24/7.

Against popular belief, domestic rabbits should live inside the home. Living outside in a hutch or pen shortens a rabbit’s 10 to 15-year life span drastically.

Rabbit housing inside the home can vary depending on the way your home functions. Some people have their rabbits free-roam the home, some have their own room, some have a cage with an exercise pen (x-pen) attached. But when it comes to housing for your rabbit, the bottom line is that they need a large cage of at least 2 stretched out bunny lengths and a place to run and play. They need another area besides their cage to run, hop, and binky around safely for at least two hours a day. Rabbits are active creatures!

Rabbits are not meant to live in small, cramped cages like so many pet stores try to make us believe. Just because a pet store sells a cage, does not mean it is good for your rabbit! In a rabbit’s habitat, a cage acts as a home base of safety. It’s an important feature to have, but it’s not the only thing they should have.
Check out our Habitat Types and Ideas to learn about different ways to set up your rabbit’s home within your home! 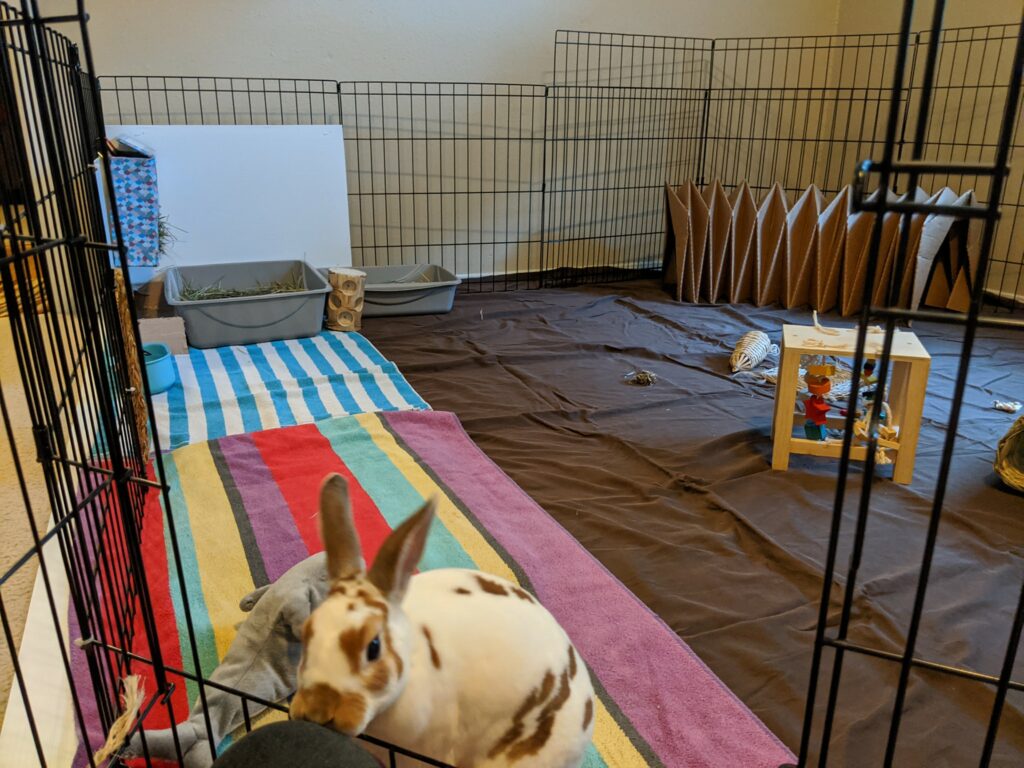 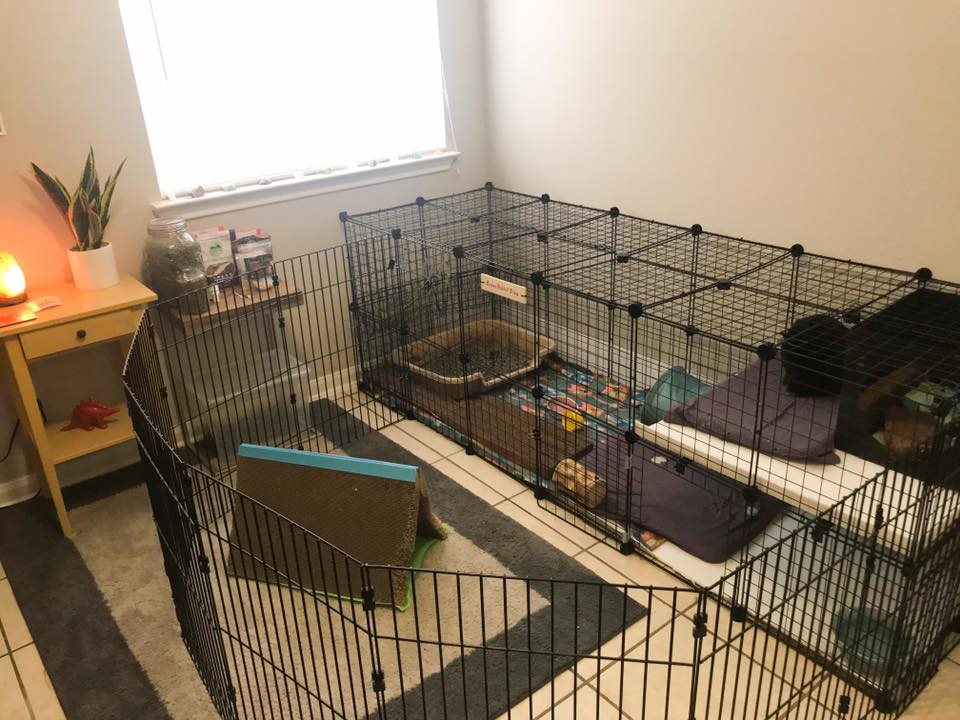 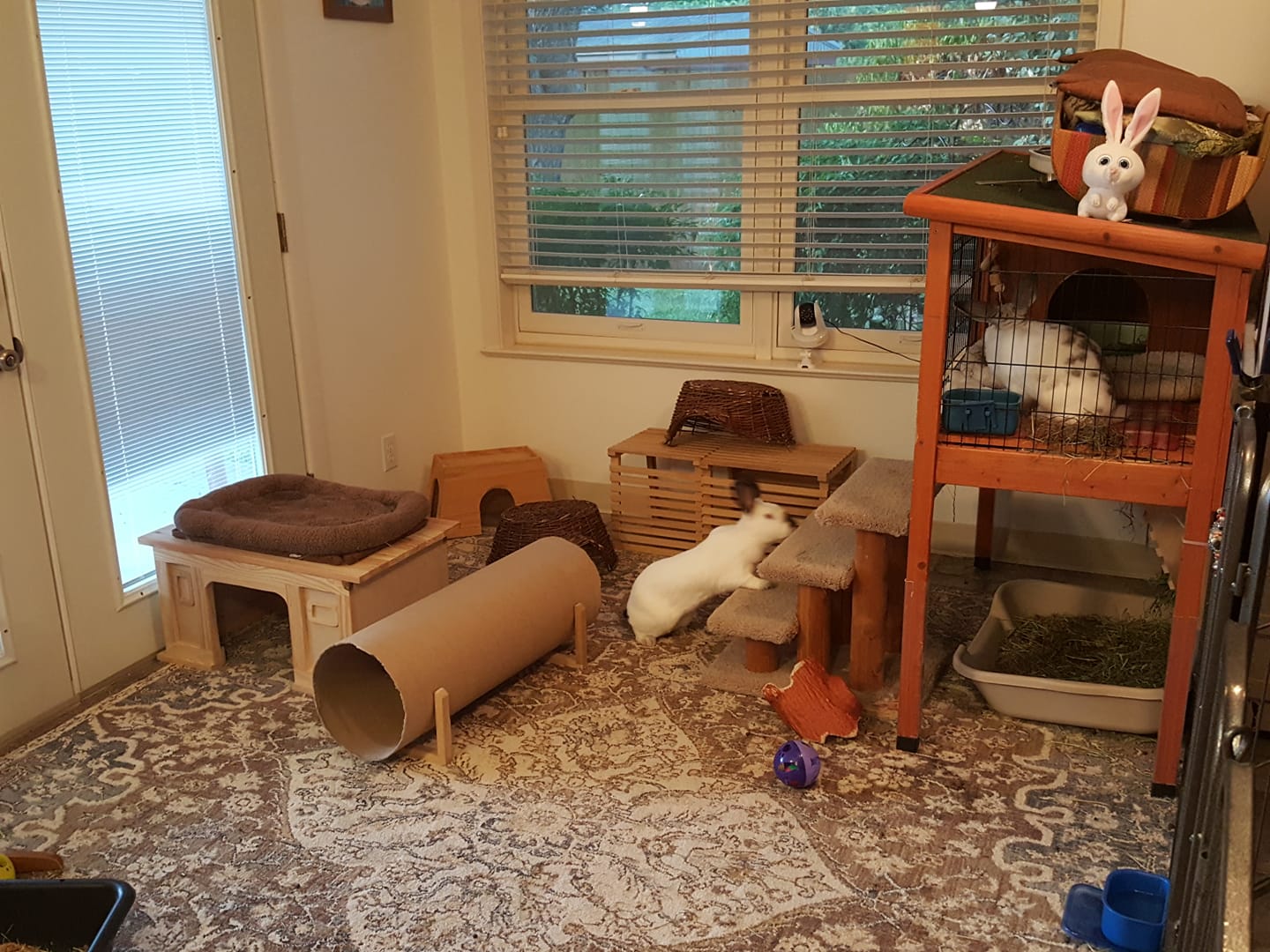 Rabbits communicate with us and each other through body language. Learn what a hind leg thump, running their chin over everything, and other things rabbits do mean. Download our “Learn to Speak Rabbit” PDF here to learn all of the common behaviors and what your rabbit is trying to tell you.

Once you learn a bit about rabbit communication, you’ll find it much easier to understand their needs and how to coexist happily together. 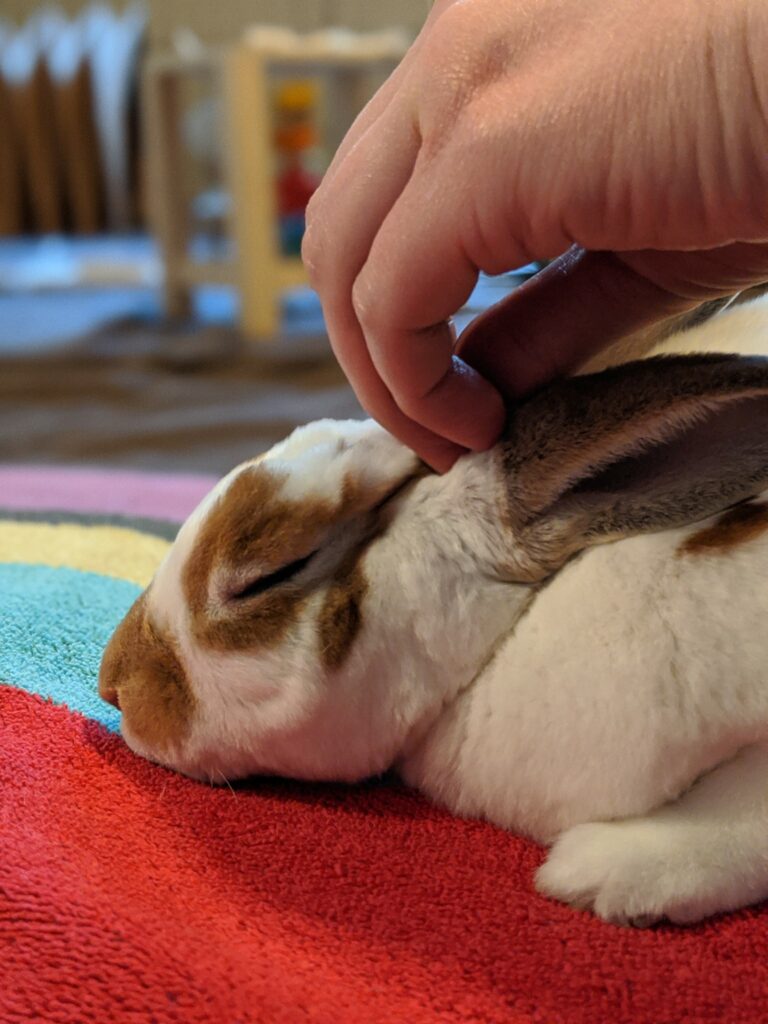 Often, rabbits display unwanted or downright bad behavior, and people have no idea what to do. Our page Rabbit Behavior Problems and Solutions covers some of the most common behaviors and how to solve them.

We want to also mention here that rabbits do not make good children’s pets or “starter pets.”

Rabbits are friendly, social creatures. But most hate being picked up–which is what children want to do with them. Rabbits will kick, claw, and bite to get free of an unwanted lift-off. Allowing a child to handle a rabbit who doesn’t want to be picked up has led to many children being badly clawed, bit, or kicked due to a house rabbit’s protests.

Children can also accidentally injure or kill the rabbit because they try to pick them up. If a struggling rabbit is dropped, its neck or back can easily break. Even if they aren’t dropped, rabbits can struggle and thrash hard enough that they break their spine or a limb trying to get away.

We urge people not to get a rabbit if they have small children because it’s not fair to the rabbit or the child. Understandably, the child wants to pick up and cuddle the rabbit. It’s cruel to submit a rabbit to a child wanting to hold and cuddle it. It can be extremely traumatic to the child if they accidentally kill their rabbit. Waiting a few years for the child to be a bit older works out better for everyone in the situation.

There are no upcoming events at this time.